About Old Guys in Action

1. Who are you guys anyway?

Old Guys in Action is a somewhat elastic group of men and women of all ages who come together through events like the Annual Old Guys in Action Calgary Icebreaker Polar Dip, and local and international running, cycling and climbing events to raise awareness and funds for inspirational people and best in class organizations tackling challenging poverty and justice issues here and overseas. Old Guys in Action supports three wonderful organizations: the Servants Anonymous Foundation, Embrace International Foundation, and Mully Children’s Family; and has made a difference in issues like global human trafficking, high rates of maternal mortality in Sierra Leone, Honduras and Guatemala, and the problem of orphaned street children in Kenya. Poke around oldguysinaction.com to learn more about Old Guys in Action. There are lots of opportunities to get involved and make a difference (and not all of them involve jumping into frozen ponds or running across African countries).

Learn about key poverty and development issues facing billions on our small planet…and about inspirational people and organizations tackling these issues.
Engage in tangible service opportunities that make a difference.
Network with others wanting to, or involved in, making a difference.
Support best in class organizations that do amazing, sacrificial work tackling these issues...organizations like Embrace International Foundation, CAUSE Canada, Mully Children's Family, Inn from the Cold and the Servants Anonymous Foundation.

3. Give me some examples of what you do.

2021/2022: Cross-Canada Bamboo Bicycle Expedition
We are cycling 5500 KM across Canada on made-in-Uganda bamboo bicycles. Funds raised will be used to purchase made-in-Uganda bamboo wheelchairs and walkers for kids living with disabilities in rural Uganda. Our efforts are part of a much larger program of Canmore-based Embrace International Foundation and their Ugandan partner, the Kyaninga Child Development Centre (KCDC) working to enable these disadvantaged children to attend school and pursue new futures otherwise totally unavailable to them.

2009-Now!: Annual Old Guys in Action Calgary Icebreaker Polar Dip
This exciting and (literally) very cool event has raised over $900,000 over the years. Visit our sister site CalgaryIcebreaker.com for more information and pictures of wonderful people getting very cold for a very worthy cause. All proceeds support the work of the Servants Anonymous Foundation with survivors of human trafficking (and their kids) in 8 countries around the world.

May 2018: The Uganda HIGH-low Expedition
The Old Guys climbed the highest peak in Uganda (Mt Margherita, 16,800 ft); cycled down the Great Rift Valley to the lowest part of Uganda (Lake Albert, 2,000 ft) and raced a triathlon in and around the Kyaninga crater (5050 ft) to raise funds in support of Embrace and KCDC and their work with kids living with disabilities in rural Uganda.

May 2017: Hit the continent running...in Kenya!
Old Guys in Action were proud co-organizers of the Mully Half-Marathon, 10KM, 5KM (May 14, 2017) in Ndalani, Kenya in support of Mully Children's Family. 2000 entrants including some of the best runners in the world participated. They left us mizungos in their dust.
October 2015: Old Guys in Action ride across Guatemala for CAUSE Canada's mother and babies health initiative
A week long ride comprising a total 30,000 ft. climb over 300KM, reaching an elevation of 12,000 ft. Over $45,000 was raised and then matched 6.5 times by the Government of Canada for a total impact of close to $300,000!!! Thank you! This is going to help a lot of moms and babies!

There are lots of ways to make a difference, and they don't all involve running, cycling across entire countries, or jumping into freezing water (although we would really like your company)...You can contact us by e-mailing: info@oldguysinaction.ca
5. By the way, are you guys a registered charity?
Nope. We encourage your support of targeted, "best of the best" organizations...charities with legal tax status and audits. Those charities provide tax receipts for your donations.
We do, however, have subsidiaries in waiting:
6. Tell us a story... 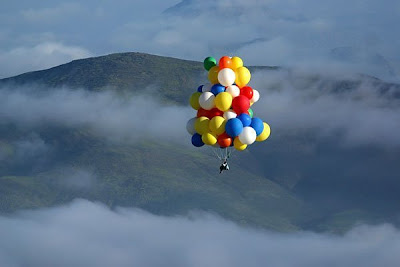 When Larry Walters was asked. "Why did you do it?" he replied, “Well, you can’t just sit there.”

Larry Walters always wanted to fly but he never had the opportunity to learn. So, he purchased a number of large helium balloons, tied them to an aluminum lawn chair, the kind you have in your back yard, and with everything ready (baloney sandwiches, a six pack of beer, a bb gun) he inflated the balloons and drifted up 15,000 feet over Los Angeles and through the air corridor of the LA airport. You can’t just sit there.

For three cyclists, part of the growing network of Old Guys in Action, the answer in May 2011 was the same, “Well, you can’t just sit there.” 1 in 8 women dying in childbirth in Sierra Leone is simply unacceptable. No women should die giving birth; no little baby should die. So we decided to cycle 500 KM across Sierra Leone in support of CAUSE Canada and their work to build birthing huts and improve maternal health care.

It was the same answer when entered into a long-term partnership with Charles and Esther Mully of Mully Children's Family in Kenya. The Mullys have adopted over 8,000 orphaned street kids over the past 25 years, changing the lives of those kids and making a generational impact on that country. They couldn't just sit there either.

And what of the hundreds of thousands of young women kidnapped, tricked, brutalized, exploited and forced into the global sex "trade." We can't help them all, but we can make a huge difference to many in supporting the Servants Anonymous Foundation. The stories are heart breaking. But here's something that is heart warming...when some of the SA Foundation program participants in Nepal watched video of our Polar Bear Plunge...they were aghast and inspired that these crazies would jump into a pond of ice water. NO! You women who have survived so much and still have the courage to forge a new life with the help of SAF...you are the inspiring ones!

For our part, we can't just sit there.