The Old Guys in Action Cross-Canada Bamboo Bicycle Expedition (BBE) is a fundraiser for Embrace International Foundation, a Canmore-based NGO that works with children living with disabilities in developing countries. You can support our efforts through the BBE by donating at https://www.embracecanada.ca/donate. Under "Fund?" select "Old Guys in Action Bamboo Bicycle Expedition". Thanks!

Through the BBE the Old Guys are looking to raise awareness and funding for children living with disabilities in Uganda, East Africa. Most of the children who will benefit from this extreme undertaking live in extreme poverty. These children are also challenged with a life-altering disability and many require the daily use of wheelchairs over rugged terrain.

According to Ross, “We fell in love with Uganda and got to know some of these wonderful children during our 2018 Uganda HIGH-low Expedition fundraiser. Terrain-appropriate, locally produced bamboo wheelchairs and other mobility devices have the power to transform the lives of these kids. To help make the connection, much of the BBE will use bamboo bikes produced in Uganda (the sticks upper right below are our bikes when they were babies. Cute, eh?).” 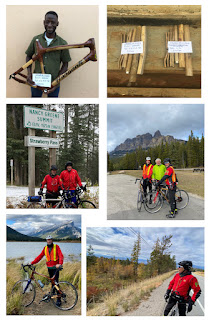 Ross and Bernie began their epic expedition in White Rock, BC in October of last year (Phase 1). They braved snow, ice and cold temperatures before being forced to stop the ride in Calgary. Now that spring has arrived in most of Canada, the ride continues with Ross attempting to complete Phase 2 (Calgary to Thunder Bay) by early May. Phase 3 will see Bernie and Ross take on the final Thunder Bay to Halifax segment starting mid-June.
Posted by Old Guys In Action at 10:18 PM

New comments are not allowed.