I’ve had a few weeks now to think about my time in Kathmandu in November with the women and children participating in the SA Foundation’s program for survivors of human trafficking and sexual exploitation. 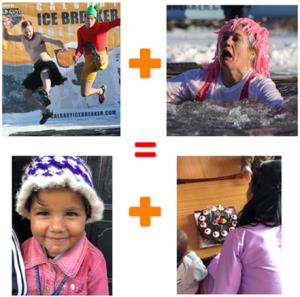 I visited the slums where these girls were forced to work in dingy brothels, beaten and abused day-after-day. I heard their stories of disease, fear and trauma. I met children as young as eleven carrying their own babies; and teens fighting the ravages of AIDS.

But the unexpected feeling I took away from my time in Nepal was one of hope. The SA home was well-run, clean, and bright; filled with women and kids who were loving and loved; who knew they were on a path to a new and hope-filled future.

While I was there a girl of 14, who had just recently joined the program, had a birthday. The staff served a cake with candles and the other girls gave her small presents. She was very emotional and gave a long, teary speech in Nepalese. She was overwhelmed by the celebration. Later I was told that she had never had a birthday party, and had never, ever, been given a gift…by anyone.

I showed the girls movies of Icebreaker Polar Dips and Distance Dips. They were shocked, amazed and truly appreciative that people half way around the world would care enough for them to jump into freezing water in the middle of winter; and generously donate money so they could have a brighter future.

I share their gratitude. Thank you to all who have donated and to those who are working so hard to organize, fundraise and prepare for another frigid flop into freezing fathoms of Mahogany Lake.

All funds raised at the Calgary Icebreaker Polar Dip go to the SA Foundation…and this year a significant portion is designated to the Nepal project. Once again Bernie and I will be old and cold. Please donate generously in support of our Dip and the great work of SAF and these wonderful young women (and their kids). You can make a donation here or by visiting our page at calgaryicebreaker.com (search for Ross, Bernie or Old Guys in Action).

Email ThisBlogThis!Share to TwitterShare to FacebookShare to Pinterest
Labels: Nepal