Only one week to the start of the Old Guys in Action Uganda HIGH-low Expedition supporting children born with cerebral palsy and other disabilities in Uganda! May 6-21, 2018 we will… 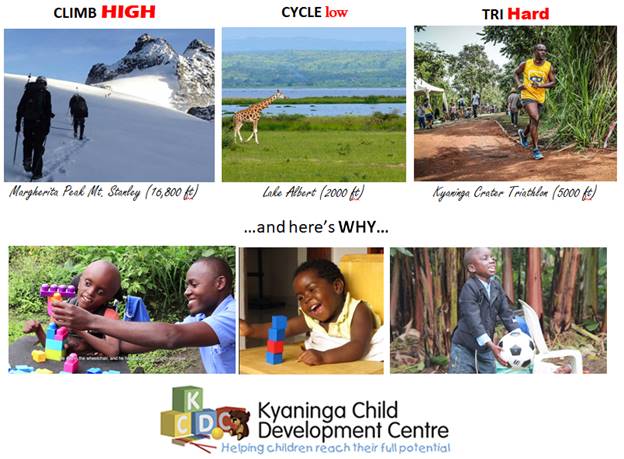 Children born with disabilities into low income families in low income countries face some of the toughest challenges of any children, anywhere. Uganda has one of the highest rates of cerebral palsy in the world; and in most parts of the country, provides low to no services for kids with CP and other disabilities. KCDC provides specialized assessment, holistic treatment, education and support to children with disabilities. They have treated close to 1,000 kids. The proceeds of the Uganda HIGH-low Expedition (target $40,000) will enable a doubling of that impact.


If you’ve donated already, thank-you so much! If you haven’t had a chance, please donate at embracecanada.ca. The Old Guys pay 100% of their expenses, so all your donations go to help these kids through KCDC…and are 100% tax receiptable. UK donors can donate at https://www.justgiving.com/fundraising/steve-williams68


More Info on the Expedition FYI


·         Margherita Peak on Mount Stanley is the highest point of Uganda and is situated on the border with the Democratic Republic of Congo. It is part of the Rwenzori mountain range, known as the Mountains of the Moon. It’s cold up top and has had close to 2 meters of snow over the past month.


·         Lake Albert is one of the lowest points in the country and is at the headwaters of the White Nile which along with the Blue Nile (originating at Lake Tana in Ethiopia) meet at Khartoum to form the Nile River that runs through Sudan and Egypt.


·         Kyaninga Lake is a crater lake. The Kyaninga Triathlon is an annual fundraiser of the Kyaninga Child Development Centre.


·         KCDC was founded by a British national (Steve Williams) and his Ugandan wife Asha. The couples’ son Sydney was born with cerebral palsy. When looking for help for Sydney they realized that there were very few resources or specialists available in the area for children with special needs. In fact, the entire annual government special needs budget for the region is under $4000. Steve and Asha are proprietors of the Kyaninga Lodge and use the lodge’s facilities for a number of annual fundraisers for KCDC.


·         Kenya? While Steve Williams and Ross Weaver are climbing Mt. Margherita, Bernie Potvin and Valerie Fortney from the Calgary Herald will be visiting Mully Children’s Family in Kenya. Old Guys in Action has engaged Val to write a book on some of the inspirational people OGIA have supported over the last 10 years, including Charles Mulli and Bev and Paul Carrick. Val and Bernie will meet Ross in Uganda for the “cycle low” and “tri hard” part of the Expedition.


·         Motorcycles? Embrace International Foundation, founded by Bev and Paul Carrick (who founded and ran CAUSE Canada for the past 30+ years) supports organizations that work with kids with disabilities in different countries in Africa and Central America. Embrace supports KCDC with motorcycles! Paul takes adventurous riders through Uganda on bikes they purchase for the tour. The riders then donate the motorbikes to KCDC workers so they can access remote parts of Uganda. Paul will be in Uganda for the “cycle low” and “tri hard” parts of the Expedition.


·         Val Fortney? After Kenya Val will meet up with the rest of the Expedition team in Uganda to interview Paul Carrick and Steve and Asha Williams.


…but will award winning journalist and author Valerie Fortney (now officially an “Old Guy”) do the triathlon??? Follow us on Instagram and Facebook to find out.