Update, update...read all about it!

It has been a while since we posted (we bad) but that doesn't mean we haven't been doing stuff! Here's a summary of activities since May:

October 14, 2018 Sewing Seeds Canada Annual Gala
-Ross and Bernie lead the auction in full Maasai warrior regalia! After the May 2017 Mully Marathon in which we came last in a field of elite Kenyan runners...we were inducted into the Maasai Mzee Mzungo Pole Pole tribe (Very slow old Caucasian guy tribe). An honor, I think...
-This spectacular event focussed on SSI's programs on 4 continents teaching women how to sew themselves to a better life.
-Visit www.sewingseedscanada.com for info.

November 2, 2017 Old Guys in Action Grilled Cheese Night at Javino
-Our 3rd year and it was the cheesiest fundraiser in town!-Support this year went to the SA Foundation. Thanks to Ruby, Al and Sayed for their tremendous generosity!

December 2, 2017 Good Samaritans Auction - Calgary. "You'll never pay more for a loaf of bread!"
-Ross and Jack Mortensen teamed up again as auctioneers.
-This event which has been held for over 3 decades provides funds for sewing and keyboarding programs for destitute women in India.-Contact jmclean142@shaw.ca for more information on the Good Samaritans.

January 1, 2018 Old Guys in Action - Calgary Icebreaker Polar Dip supporting the Servants Anonymous Foundation
-The 2018 Icebreaker was the most successful one yet raising over $103,000 for the SA Foundation. Thanks so much to all Dipsters, donors, sponsors, volunteers and everyone for making this such a fantastic event. And thanks to the SA Foundation for the inspirational work that they do with survivors of sexual exploitation and human trafficking!
-Visit sister site www.calgaryicebreaker.com for lots of spectacular pictures and videos! 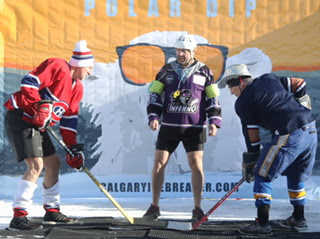 With Order of Canada member Sheldon Kennedy...
...just before he ordered us to jump into the frozen lake
Posted by Old Guys In Action at 3:20 PM