Coming October 2015!
Old Guys in Action Ride across Guatemala for Mothers and Babies 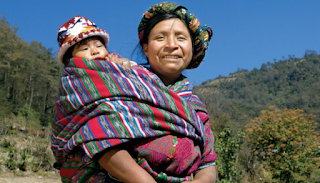 The Need:
33% of indigenous women in the mountainous highlands of Guatemala have no access to formal prenatal/postnatal care.

Maternal mortality is twice the national average; twice the UN Millennium Development Goal target for 2015.
Malnutrition for kids under 5 is the 6th highest in the world.
Cultural & language barriers contribute to poor utilization of government health clinics. Clinics that do exist in these remote areas are crumbling, under-staffed and poorly equipped.


The Response:
CAUSE Canada, with over 30 years of experience in Guatemala, has been entrusted by the Canadian Government to manage a $4.4 million, 4½ year program that will directly benefit 68,000 mothers and babies and indirectly benefit another 160,000 men, women and children. The program will:
·         Renovate, equip and staff 57 Maternal Newborn Child Health (MNCH) centres by 2020.
·         Institute health training programs through local women’s MNCH committees.
·         Provide pre- and post-natal counselling.

Our/Your Part:
CAUSE Canada must raise $675,000 as part of this Canadian Government grant program and has asked for help from Old Guys in Action to raise $40,000 of that total through their Ride Across Guatemala for Mothers and Babies. Here’s the plan:


Please help Old Guys in Action and CAUSE Canada make a difference.

Give now to CAUSE Canada!

See below for how to donate:

Go online now to CAUSE Canada at
http://www.cause.ca/donate

When you go to this site, you will see a form at the bottom of the page that looks like this example below: 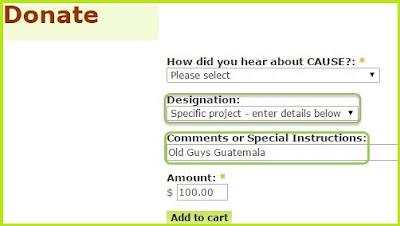 You can also give cash, or a cheque payable to CAUSE Canada, to one of the Old Guys. Or mail a cheque to:
CAUSE Canada, PO Box 8100, Canmore, Alberta T1W 2T8.


Don’t forget to reference Old Guys Guatemala on the cheque.

Email ThisBlogThis!Share to TwitterShare to FacebookShare to Pinterest
Labels: 2015 Ride Across Guatemala