Way to go TEAM! All 16 Old Guys in Action runners successfully completed their races on May 27…and more importantly, helped in raising $16,000 (so far) for Mully Children’s Family. Thank you to donors who gave so generously to make a difference in the lives of former orphans and abandoned street kids in Kenya. 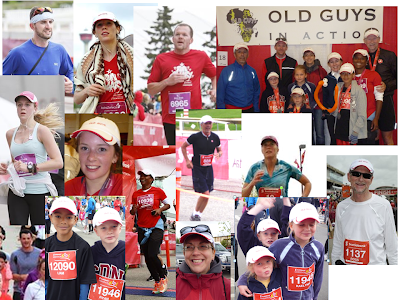 Amber, Kaelynn, Ryan and Liam: Well done! These kids put in the big KMs in the weeks leading to the Kid’s marathon, running the final KM on race day. What a great way to show you care for kids half way around the world in Kenya!
5 KM runners Ann, Gabe, Claire and Sophia; and 10 KM runners Sarah, Taegan, Jason and Dave: Thank you for your support and congratulations on races well run!
Marathoners on the team ranged from ultra-marathon veteran Nicki Rehn, to first-time marathoner Jon Kennard, to old and original Old Guys Bernie and Ross. Thank you all! Way to go!
Every runner has a story at the end of a race, especially a marathon. Our stories include cramps…lactic laced legs…chocolate gel packs leaking from running shorts (traumatizing nearby runners)...mantras of “it’s only pain, it’s only pain”…finding inspiration wherever it can be found to put one foot in front of the other, yet again.
I took inspiration from a sign I saw heading out at the beginning of the marathon…and again on the home stretch over 4 hours later. It read “Go! Total Stranger, Go!” The lady holding the sign was boisterously encouraging the runners over that whole period, as were hundreds of other cowbell ringing, noise-maker slapping, bubuzela blowing  supporters. They really did lift our spirits and helped us through the marathon mind-fog to keep going.
Just like the fans that lined the marathon route, all of us Old Guys runners and donors are fans of you, Charles and Esther Mully…and all 6000 of your kids! We love you! We think you have an amazing story. Each of you have overcome obstacles and have a wonderful bright future. We hope you are encouraged by our efforts in this race. “GO! Mully Family, GO!”
Posted by Old Guys In Action at 11:23 AM

Email ThisBlogThis!Share to TwitterShare to FacebookShare to Pinterest
Labels: May 2012 Team Mulli at the Calgary Marathon