Aside: Since this is Jon's first trip to Africa, he will be authoring the lion's share of the blog posts, but occasionally Ross and Bernie will contribute, such as this one from Ross: 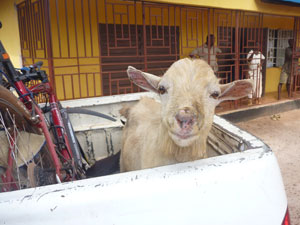 Up at 6:45 a.m. to prepare for the appointed breakfast at 7:30 a.m. The truck shows up at 8:40 a.m. Not pleased as we could have slept longer, or more importantly have got cycling before the worst heat of the day (36 degrees in the shade today).
Oh well. Breakfast at the CAUSE Canada office and then off to Pendembu by truck, complete with two goats belonging to Mr. Arthur Cummings (CAUSE Canada's Sierra Leone Country Director and former CEO of Red Cross here)  who will travel with us all the way to Freetown.  Apparently goats are three times as expensive in Freetown as they are "up country."
As Bernie has gone ahead to Makeni for educational training meetings, Oumar is riding with us. Oumar is slow but steady. 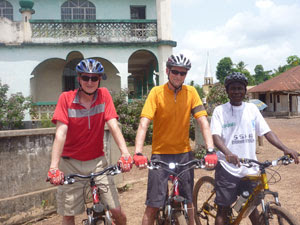 A short additional ride takes us to the paved highway. Busy, noisy.  Instant re-entry to urban sprawl. It gets busier and more bustling as we go the last 5-6 km into Makeni.
We see an odd apparition, a helmeted motorcyclist wearing a full Montreal Canadians hockey jersey... and it's waving at us! Through our sweat it takes us a while to recognize it is Paul and Larry zooming by on their way up to Kabala.
Makeni is the beautiful, chaotic reality of an African town/city.  Everything and anything is going on, traffic is 4-5 abreast the wrong way, families on motorcycles, incessant tooting of horns, voices, boom boxes, smells of garbage, cooking fires, bread, diesel, sweat.
We arrive exhausted and meet Mr Cummings and others who, in five minutes, tell us they are on their way to Kabala, but that we should proceed immediately to the School for the Disabled. We are completely soaked in sweat and would love even five minutes with a Coke and time to put our feet up, but off we pedal for another 3 km to the school...for a surprise.
Two local CAUSE workers introduce us to the school principal lady and the school chairperson, a man crippled with polio. We are then ushered into the main hall where 150 hot kids are assembled who have been awaiting our arrival for some time. All the kids are either disabled or children of disabled people. (These kids are often sent into the streets to beg for a living rather than go to school).
They start to sing welcome songs, including 5-6 verses of a song and dance centred on the words, “We welcome you Little Weaver”.
Paul had told them that "Little Weaver" (Jon being the youngest of the four siblings) and another man were coming.  The administration is desperate to finance a new school building and funds to catch up on teacher pay which has not been provided for some months (they are about to be evicted from the current one and had already secured land on which to build). They are hoping that "Little Weaver" and friend can help... 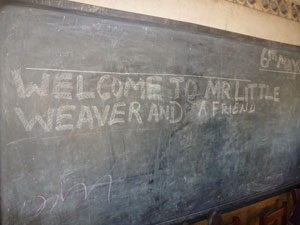 The chairman starts a speech, apparently fully written out explaining their plight, but pauses just a bit too long and the principal cuts in with her own fully prepared speech. It took me a while to realize she was reading the speech from a sheet of typed Braille. She is blind.
The ceremonies continue with everyone except Jon and I oblivious to the fact we are generating a pool of sweat under each of our chairs.  Everyone except Jon is oblivious to the pain of his saddle wound.
Speeches end with an invitation to Little Weaver to explain just how committed he is to their school and how much money he was going to provide.
Jon commits to discussing the matter with Mommy Bev (our sister, Executive Director of CAUSE); I responded to an invitation to speak with words of encouragement, but no firm commitment.
School visit done, we take pictures outside with the kids and cycle off, leaving drops of sweat in our path. We don’t get too far. The truck which had been having clutch troubles all day is in for repairs. 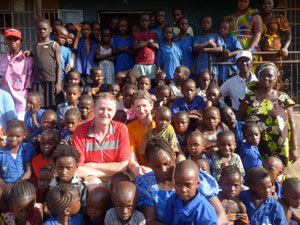 We finally locate a restaurant and have a plate of rice and fish.  Locals are barbequing what they call “bush meat”.  Looks good. On inquiring about this later on, I am told bush meat is any animal found in the bush that goes well with barbeque sauce.  Depending on the day and the location in the country, bush meat could be squirrel, porcupine, monkey, baboon, hedgehog or something else. I would like to try some before I leave.
The truck is ready with a new clutch, so we weave our way through wacky traffic out of town...3 old guys, 2 sierra Leoneans, 4 bikes, 46 L of drinking water...and two goats.
It is a 2-1/2 hour ride on a pothole-infested paved road.  Finally we start the switchbacks that climb up to Kabala, arriving about 10:30.
We discuss the "Little Weaver" story with Paul and Larry outside  their room at the Sengbeh Guest House.
RW
Posted by Old Guys In Action at 6:16 PM