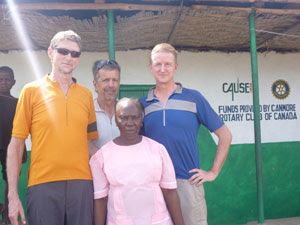 This morning we visit another CAUSE Canada birthing hut locations, this one built from the funds raised by the Rotary Club of Canmore, Alberta.  Once again, we drive well into the bush where another village depends on their birthing hut to help them beat the odds and deliver healthy babies... and once again, we are deeply touched by the sight of the real lives this project is saving. 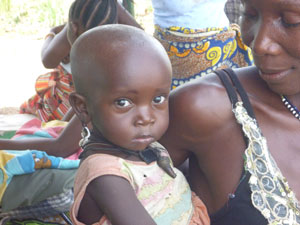 To help sate our taste for remote bush trails, we decide to bike out from this village to the main road. We then drive to another bush track that was recommended by Moses James the night before and it turns out to be some of the coolest single-track action thus far.
Eventually, this leads to typical dirt road, then to pavement.  We plunk our sweaty into the pickup and drive to Waterloo.
Waterloo is a sprawling urban space with market stalls and shanty houses, but with paved roads. Here, we get on the bikes again for the ride to Sussex.  After two hours in the pickup truck, we feel like we have been ridden hard and put away wet, which is exactly the case, come to think of it.
Back in team road-riding mode, we head out of Waterloo in tight formation against a strong headwind on a beautiful new, but hilly, two-lane highway.  We all feel the wear and tear of this long day and at one point we use one of our rest stops to actually stretch out on the road to rest our parts.  A short time later we are buoyed by our first glimpse of the Atlantic Ocean (!) and the sun setting between the Peninsula Mountains on the right and the Atlantic coast on the left.  Beautiful. 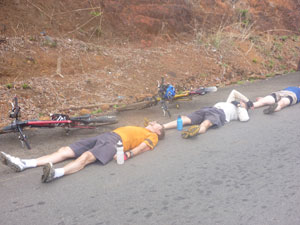 When the highway ends, we're back to dirt / what used to be pavement. During the war, the rebels tore up many of the paved roads to make it more difficult to be followed.  We cycle through an enormous highway construction project that will connect Waterloo to the nation's capital, Freetown.
One particularly bad section of dirt road sends us pedalling through through a pothole puddle so deep that Ross and I both get shoe soakers.  Hey, when you're in the deep end, it's either pedal or swim!
At long last, we pull into Florence's Resort (formerly, and more commonly known as Franco's), founded by Franco & Florence, an Italian couple who have been running the joint since the 1980s.  It is a beautiful little place on the beach, with a restaurant that specializes in Italian dishes and especially barracuda!  Franco speaks an incomprehensible mixture of Italian, Creole (and maybe English?). I do a fair bit of nodding and smiling. 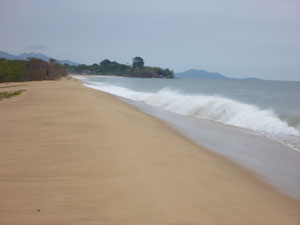 After a gruelling day of jungle track, dirt, back seat of pickup, then back to road, construction site and dirt again, Franco's is an oasis, a welcome respite and a chance to recover a bit before the push to the finish line.  Paul and Larry are there as well.  Ironically, in the room Ross and I share, the shower has scalding hot water... but no cold water.
... but the grilled barracuda is amazing.
JW
Posted by Old Guys In Action at 12:00 AM