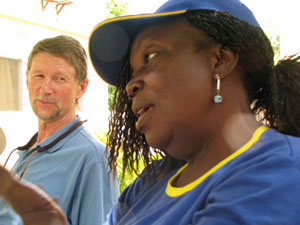 Theresa Benjamin is simply one of the most formidable people I have ever met.  During the war in Sierra Leone, when rebels were abducting children, drugging them and turning them into child soldiers, Theresa saved countless boys and girls by walking miles and miles barefoot through the bush and risking her life to rescue them.  Trained as a nurse and highly experienced in maternal and child health, Theresa is in charge of projects in the southern half of the country and heads up CAUSE's birthing huts project. I met Theresa in 2000 when I ran CAUSE Canada Atlantic. She is simply a force to be reckoned with and, incidentally, a ton of fun to be with.
Today, Theresa takes us to see exactly what we have come all this way and done all this work for.  We drive deep into the bush along single lane path to two remote villages where these birthing huts are
currently operating. 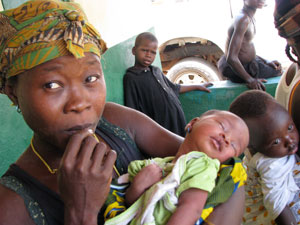 We are greeted by a throng of primary (followed by secondary) school children, who parade in accompanied by a drum group and singing welcome songs to us. There are dozens of women here, either pregnant or carrying infants, and it dawns on me:  These are women and babies whose lives were likely saved by the project we are here to support.  I am blown away.
The birthing hut itself is a concrete structure, about 30 ft square with a corrugated tin roof.  It is typically staffed by two Maternal and Child Health Aids (MCHAs) and five Traditional Birthing Assistants (TBAs) who work on rotation.  The women we meet have been admitted for a variety of perinatal complications, ranging from edema (swelling of the lower limbs) to postpartum health issues. Without the birthing huts program, it is women like these who die trying to walk to the nearest hospital with their unborn babies. 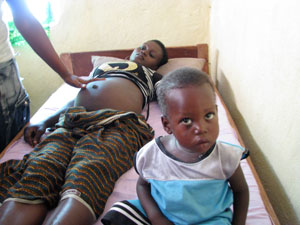 The MCHAs demonstrate an astounding level of understanding of all things maternal, a combination of traditional knowledge, appropriate technology and modern medical science.  As we bike out of the second village, I am left with the overwhelming sense that this project is truly making a difference.
The day is far from over.  We still have to bike all the way to Taiama. The heat, as usual, is not our ally, but we make Taiama by sunset and check into the Taiama Lodge, an oddly gaudy guest house with Roman columns and ornate finery.  We are the only guests here tonight.
While having supper, we strike up a conversation with Moses James, a Sierra Leonean man who has stopped in for a drink.  He has been living in the US for 20 years, and is back now to plan construction of his retirement homes in Taiama and Freetown.  He is a fascinating man with very interesting views on the current state and future of his country.  He is also the brother of the local Paramount Chief.  He calls his brother to arrange an informal meeting with us, but alas, it is too late and the Chief is bound for bed.
So, too, are we.
JW
Posted by Old Guys In Action at 10:48 PM