May 5
This is a day out of the saddle (phew).  It starts with goat pepper soup, eggs, and fritters.  Today also marks CAUSE Canada's return to Kamakwie.  Here, their focus in Kamakwie is on women's empowerment, a cornerstone of sustainable development.
Aside:  In the early 1990's, rebels from the civil war in Liberia started raiding across the border into Sierra Leone.  These rebels (the Revolutionary United Front, or RUF) brutally slaughtered authority figures, turned innocent boys and girls into child soldiers and sex slaves, and caused massive property and infrastructure damage. They gutted many schools and turned them into barracks and bases of operation.  During this time, CAUSE Canada was the only NGO that did not pull out of the country entirely, but they were forced to close operations in Kamakwie.
Today is a triumphant celebration of CAUSE's return to the region.
Downtown, a throng of dignitaries (including our new friend, the Paramount Chief) and a women's group gather and start dancing to drums and singing in the street.  We process to a covered amphitheatre where we Old Guys sit in seats of honour alongside the Paramount Chief, police chief, and CAUSE Canada staff facing the audience.
For CAUSE Canada's excellent work in the region, founder, Paul Carrick, was made an honourary Section Chief (one step below Paramount Chief) before the war. He is dressed in his ceremonial chief attire, as are the other 25 or so Section Chiefs in the front row facing us-extraordinarily distinguished gentlemen straight off the cover of National Geographic.
Many introductions, formalities and speeches later (and, for the record, sitting still on a wooden chair for hours with a saddle sore in front of an audience is more painful than our daily ride over dirt washboard in 40-degree heat. There, I said it)... we all adjourn and process up the hill for the ribbon-cutting ceremonies.
It is a magnificent sight:   About 500 Sierra Leoneans dressed in vibrantly coloured traditional garb slowly making their way up to the new CAUSE Canada offices. Ross is given the honour of cutting one of the ribbons and delivers a short impromptu speech with grace and authority. 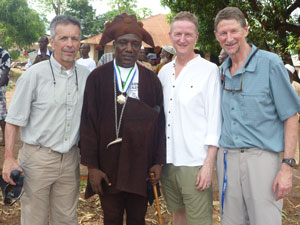 After the ceremonies, it's goat stew with the Paramount and Section Chiefs.  One of the honourary Section Chiefs has spent 22 years in Los Angeles and lives in Kamakwie in a small scale replica of the White House that he built.   (!)
We temporarily part company with Bernie.  He will spend the rest of this day and the next working with CAUSE Canada on a needs assessment for teacher development at Makeni University.
Aside: For those who don't know him, fellow Old Guy, Bernie Potvin is a chair and associate professor of education at Ambrose University College in Calgary.  He has taught courses and developed programs for schools and universities across the globe, much of it in Africa (Liberia, Kenya, South Africa and Zambia) and much of it pro bono.  He is a gentle, mellow man-very kind, wise and soft spoken, but with a keen wit.  Athletically, he is a runner at heart (more than a cyclist)and has been running distance since his college days. 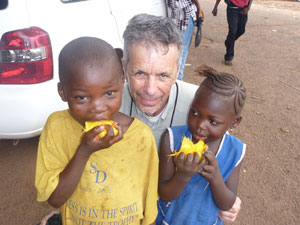 Ross and I go for a little, and slow, 3 km or so run to avoid getting too soft from eating Augusta's cooking and eating mangoes on our day off. We stop by the White House on our run, but the Chief is not in-alas.
Early to bed, for tomorrow WE RIDE !
JW
Posted by Old Guys In Action at 12:00 AM