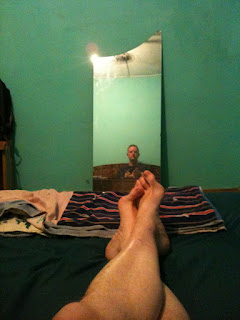 May 1
Ross and I hook up with Bernie at London Heathrow Airport. With him are Larry Brooks and Cause Canada founder (my brother-in-law), Paul Carrick.

Paul and Larry (an accountant and long-time friend of Paul's) will be visiting Cause Canada projects all over Sierra Leone by dirt bike and doing "money business" (the Sierra Leonean term for accounting).

Together, we board the 7-hour flight to Freetown, stopping in Malagá, Spain to refuel.  I sit next to Robert, a Scottish road worker who is starting seven weeks away from his young family, on his way to build a road somewhere in Sierra Leone.
I wonder if we will see him again along the way.

11:30 p.m.
We land in Freetown, actually in Lungi across the estuary from Freetown.

The airport is mildly chaotic with officers in various uniforms demanding this paper and that, but we clear customs without major issue.

Tonight we stay in a "guest house" in Lungi.  An austere, concrete building in a walled-in, barbed-wire compound and typically frequented by Sierra Leoneans stranded at the airport.

There is no running water.  A bucket of dirty water on the bathroom floor serves for both bathing and flushing the toilet.

The night air is warm and thick with notes of kerosine, diesel and wood fire.
From the rooftop patio of the guest house, the stars are breathtaking.

This is my first taste of Africa.
JW
Posted by Old Guys In Action at 8:22 PM